Day 6 on the Road: Move Over, Coming Through! or How'd I get to Iowa?

Today was great. Had a good sleep and was on the road by 7:30am. The temperature was only around 0 C, so I didn't even have to scrape the windshield, which is always a good thing. Just as we were getting ready to go, I heard the weirdest sound. It was something like a whole bunch of sirens far off in the distance. It took me a minute or two to figure out that is was hundreds (maybe thousands) of Canada geese camping out in a nearby wetland. The boys thought is was pretty awesome too.

Nebraska was not my cup of tea. I can't quite put my finger on it, but the place made me uneasy. Could've been all the flat, wide, open fields; could have been all the hillbillies. I don't know. This morning we crossed the state line... into Iowa! The funny thing is, I didn't realize we would be passing through Iowa! I also didn't realize we'd be driving through Indiana or Ohio! I guess what happened is I was focusing on the cities & states I'd be stopping in, and just sort of... skipped over the rest of it. So, for your education as well as my own, here's the run down of the states I've passed through and the ones to come! 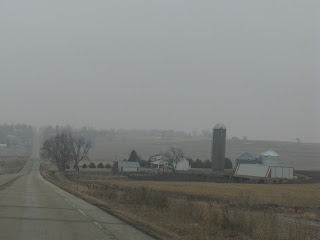 I stopped by a rest stop shortly after crossing into Iowa. There was a lady there named Melody (my Sister' name!) whose job it was to direct travellers to whatever they were looking for. I told her I wanted to take a few pictures of some cool things that wouldn't take me too far out of my way, and she hooked me up! I really enjoyed driving through Iowa. It's less prairie-like than Wyoming & Nebraska, and it actually has trees! The landscape is very pastoral and calming. 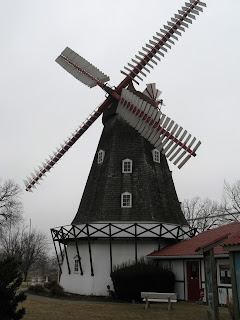 This is an authentic Danish windmill build in 1848 and transported to Elk Horn, Iowa in 1976. Apparently it is a pretty big deal. It cost the locals $100,000 at the time to have it brought over. You can climb around inside and visit the gift shop and museum, but it was so freaking windy and cold, I just wanted to get back in the car and crank the heat. I did however support the local economy by buying gas and a delicious Cheddar, Pear & Bacon sandwich (on homemade multigrain bread) at the local diner called 'Good Eats'. Yes it was. I just love fruit in sandwiches. And salads. Yes, I'm kinda weird. 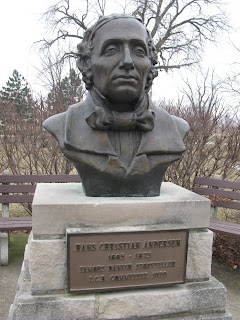 This picture is for my friend Eunice, who is clearly very fond of bronze busts (that sounded dirty, didn't it?). Sorry about that. I don't know why they had a bust of Hans Christian Andersen in Elk Horn, except for the reason he was Danish. Maybe that was enough. Or maybe he was on sale. 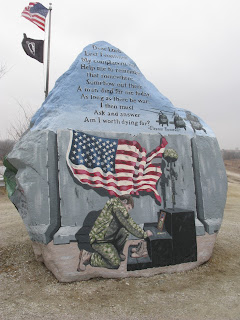 The next landmark is a sombre one. There used to be a huge graffiti rock in Greenfield, Iowa, where kids would go to let off some steam or make some fringe art statements. Then one year, a local artist named (I kid you not) Bubba Sorensen decided to paint it for Memorial Day as a tribute to the area's fallen military men & women. He's been doing it every year now for over ten years, with a new fresco every Memorial Day. Some local families were so moved that they wanted to scatter their loved ones' ashes at the site, but it was pointed out that the spot is quite windy, and that wouldn't end well. Instead, Bubba suggested they put the boys' ashes in his green paint, so a part of them would be there forever. To date, the ashes of 20 service men & women have been painted on Freedom Rock. 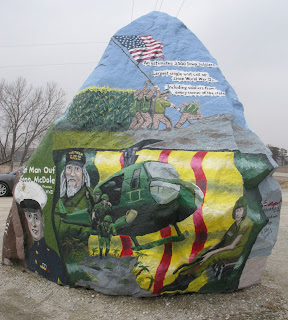 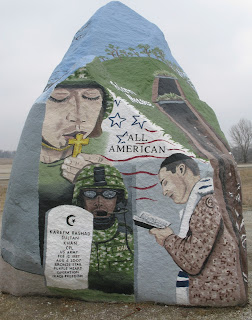 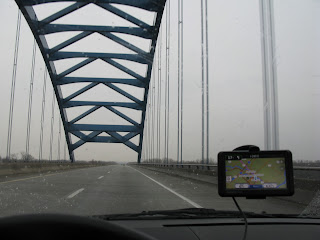 On a different note, today I crossed the mighty Mississippi River! Yes, it does go all the way up to Illinois! Actually, it flows down from Illinois (or somewhere else, I'm not entirely sure because Leo is napping on the map). 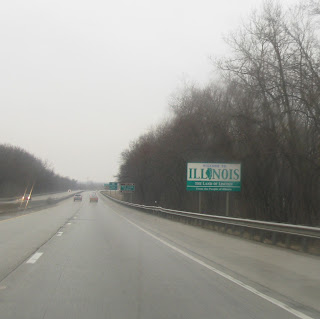 Proof that I made it into Illinois. I had great plans to capture every State sign as I passed it, but the truth is, many of them are placed where there is nowhere to pull over, and occasionally (like in the case of Oregon), there is no sign at all- at least not where I was driving. 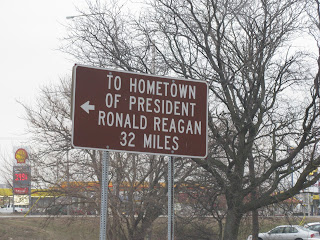 Tonight I'm staying in a real dive. I won't go into the details because if you are eating, you might throw up on your keyboard and demand restitution. Originally I thought it was about 2% better than the motel in Baker City, but now I've decided that it is in fact worse. Again, I'm not going in to details, that way it will be easier to forget. 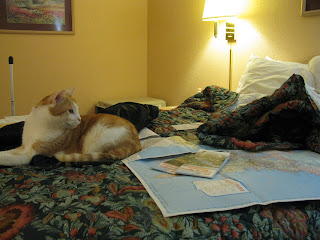 Max and Leo are OK with it though. Can you spot Leo? 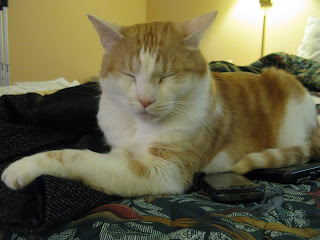 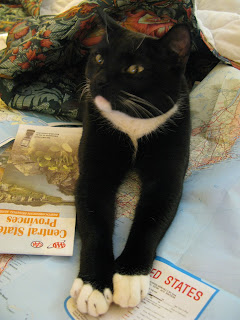 Leo's more old-school, he's all over the maps. 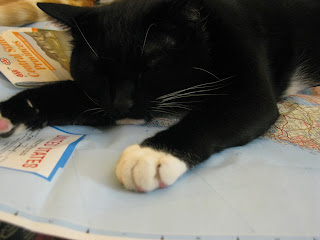 Travelling is exhausting for everyone.

(if you like Sci Fi, dystopian fiction, or even a good mystery, you should read this book! It was amazing!)
Albums: The ArchAndroid

Now we want a bacon cheese and pear sandwich...on homemade freekin bread...p.s. not fair to take all the geese with you! Love MandD

Sorry it took me so long to catch up on your adventures! The cats seem to have calmed down. Must feel great to almost be there, i am wishing more and more that i had had the time off to drive with you! Good luck on your next leg of your journey and i will stay tuned! Miss you!! =)

Thanks for the picture of Hans. I should start an on-line album of busts. Wait.....I could get too many hits on this site. I'll have to rename it.

On another note, loved the painted rocks and I can't believe that the windmill was shipped over. How cool is that?

You are my small towns USA teacher!