Day 5 on the Road: The Epic Fail 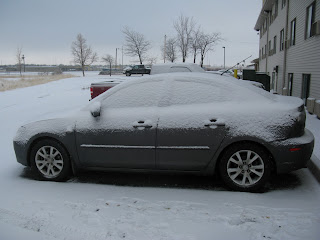 I woke up this morning and checked the road conditions, and decided to delay departure by an hour to let the trucks do their thing. We ended up leaving even later than that, because brilliant me, I didn't factor in the time it would take to scrape all the ice off my car. Thankfully, like a good Girl Guide, I have 3 different scrapers with me, so I have that covered. 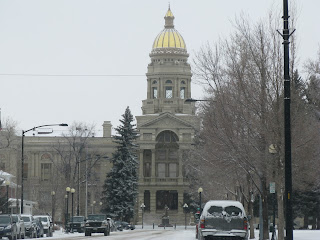 Once we were on our way, we swung through downtown to hit the Starbucks (surprising, eh?), and I snapped this pic of their State building. The rest of Cheyenne looked like a time warp to 1960, complete with giant, cheezy neon billboards and 'futuristic' architecture reminiscent of the Jetsons.

Shortly after leaving town, I discovered that we had a problem. A pretty big problem. My windshield washer fluid was frozen. You might say 'big deal', but when you're driving down a snowy, icy highway with 6 semis for every car, and the temperature is -9 C, every little bit of moisture that gets thrown up on to the windshield freezes instantly, and you have NO way of clearing it off. So I pulled over at the next truck stop and put a pint of rubbing alcohol and some strong winter wiper fluid in. The truck stop is called Antelope Truck Stop and as well as the usual C-store, gas, washrooms and laundry, there was a tiny little Indian restaurant! The stop is run by 3 generations of a hardworking, multitasking Punjabi family. Even though it was 9am, I decided to stroll over to the restaurant while my wiper fluid did it's thing. 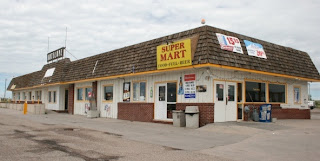 I'm SO glad I did. Lunch prospects have been rare along my trip, and I've had to eat fast food or protein bars most of the time. I'd been hoping to come across a little place like this, so I ordered the samosas. They came hot and fresh (to go) 10 minutes later, complete with sauce, veggie kachumber and a very generous portion of Chole Puri. I put the to-go bag on the passenger seat, and within moments the car smelled so wondrous I caught myself groaning with desire several times. I'm so glad nobody was around to hear that. I can't tell you how freaking delicious it all was. The samosas were not quite as good as (in my opinion) the BEST samosas EVAR at Calgary Sweets, but they came pretty close.

To take the good with the bad, the windshield fluid was still frozen. I cleaned out the nozzle, and did everything else I could, but in the end, I just had to deal with it. Every 50 miles of so, I'd pull over at a gas station and clean the windshield. 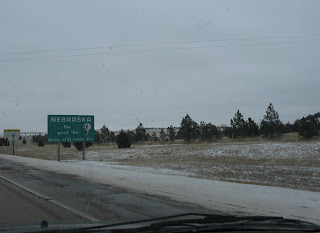 Cue the Banjo!! We're in Nebraska, and let me say (quietly) that it's a little bit like Deliverance around here. Maybe not in the big towns, but in the tiny ones where I'd stop to do the windshield, I got in and out as freaking fast as I could. 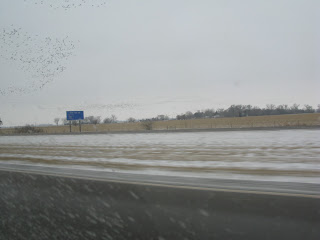 My migration through Nebraska seems to have coincided with the migration of millions of Canada Geese. Really neat to see. I only caught a corner of the giant cloud of them as the roads were very icy today and my attention was focused on staying between the lines. I'm happy to report I drive much better than I colour.
Because of my late start, crossing into a new timezone and all the stops I had to make, we lost a lot of time today. I decided to stop for the night in Grand Island (not an island) Nebraska because it has a Mazda dealership. I swung by the service center at around 4:15pm and explained my situation. They looked at me like I had 3 heads. The car sat in the heated shop for another 15 minutes before a tech took a look at it, and wouldn't you know it, the wiper spray worked the first time! I'm guessing the fluid lines just needed that time out of the freezing weather to thaw. (Now they really thought I was nuts.) With all that rubbing alcohol mixed in, it shouldn't (knock on wood) give me any trouble tomorrow.
What did I learn today? Well, I learned to put the alcohol in the wiper fluid before you hit the cold weather. I learned that if you are a woman of greater than 30 yrs in Wyoming, you sleep in curlers and walk around looking like you're ready to accept a country music award. I learned that either people in Nebraska can't afford to see the Dentist, or there aren't many Dentists in Nebraska (or both.). I learned that when in doubt of what to have for dinner, ask a Mexican where the good Mexican food is (it was a very good food day). 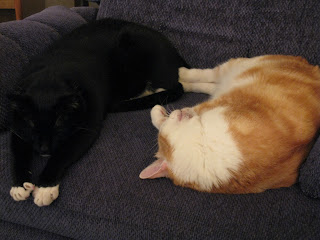 Tonight's hotel room is minuscule, but clean and well appointed. Max and Leo approve. Oh! Cat news! You probably don't care, but I'm going to tell you anyway that it would appear that Max's diabetes are in remission! He's been off Insulin for almost a week now and his blood sugar levels are right where they should be for a non-diabetic cat, even with all this stress! He does have a touch of kitty acne though, (because of the stress) so he'll probably need to see a vet anyway when we finally get to Baltimore.
Today's drive: 590kms in 7 hrs.
Starting point; Cheyenne, WY.
Terminus; Grand Island, NE.

The geese are all the family saying hello! They are always around whenever good things are happening for us. By the sounds of things, everybody showed up.
Love from MandD

I'm glad you at least had a good food day. Keep up the photos...especially of Max and Leo - Sawyer loves the kitty pictures.