Day 4 on the Road: From Rolling to Relaxing.

Today's long day of driving had a rough start. I couldn't drag my ass out of bed for love or money. By the time I was up, showered & out the door (with cats & crate in tow) it was past 8am. I didn't realise until later that since Utah is an hour ahead, my body felt like I was trying to get up an hour too early. Thank god & toast that Odgen had a Starbucks. 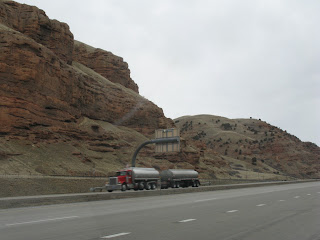 Driving through Utah was amazing, and very distracting. I had to pull over so many times just to look around. This is definitely a place I could see myself coming back to to explore. One of our Library patrons vacationed there once, and he said that if you ventured out into the canyon lands, there is graffiti that you can see that's been there for hundreds of years! Now take a moment and remember the last time you made some graffiti (for me, I think it was Jr. High), and imagine someone looking at it 200 years from now. 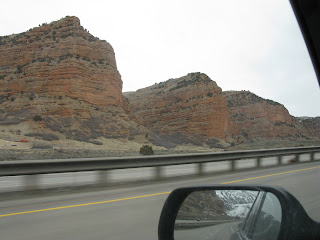 Another thing I found interesting about Utah were the houses. I don't have any good pictures to illustrate this, but there were an awful lot of little communities of houses (maybe 30 or so?) scattered around the valley just outside of Salt Lake City. No big deal, right? Well, the thing is, I'm not sure you could really call these houses as they were more like mansions. Ten to Twenty bedrooms, easy. I'm still not sure what to make of these. Wealthy, secluded neighbourhoods? Polygamist compounds? Who knows, but it's fun to speculate. 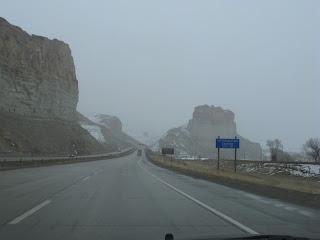 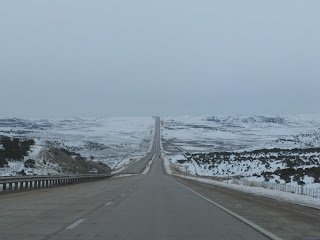 Crossing the border into Wyoming was a very tangible thing. You could tell you'd done it even with your eyes closed, but you'd bloody well better keep them peeled. The first thing you notice is that the pavement switches from asphalt to concrete slabs. From what I understand, concrete lasts longer, though you wouldn't know it by the state of Wyoming's roads. On top of the 'thunk, thunk, thunk, thunk' sound you get (because the slabs shrink in cold weather producing a gap in between each piece), there are a million effing potholes. Now, to a semi, they're probably not a big deal due to the size of their tires, but they're a huge deal when you're driving a compact!! Fortunately, as you can see above, the hwy is pretty much a straight line, so it's easy to dance around the holes- if you're paying attention. 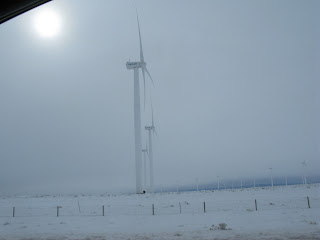 Ran into some more wind farms- up close this time. They really are ginourmous. I feel like a little kid every time I see them- I really shouldn't get so excited! 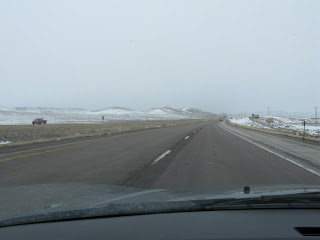 Today I also crossed the Continental Divide! Cool, right? Please wait a moment while I look up what the hell it is... Okay, I'm back. According to Wikipedia, The Continental Divide of the Americas, also called the Great Divide, separates the watersheds of the Pacific Ocean from those of the Atlantic and Arctic Oceans. Fair enough! 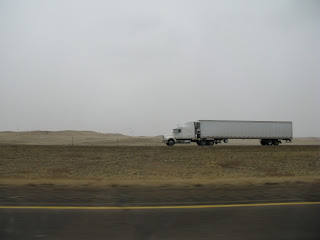 What you see above is indicative of the second half of the drive through Wyoming today. Rolling rangeland, with a smattering of cattle (I saw tons of black ones and a few furry ones- seriously! They had long, curly fur! No, they weren't Bison, I'm not a complete moron) and sheep, and the occasional oil pump. All of the grazing animals I've been seeing have tiny little babies that couldn't be more that a couple weeks old- probably newer. They're soooo cute, and totally putting me off meat. 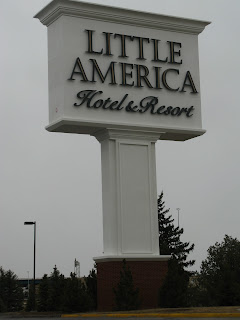 Now, let's talk about some important issues. Namely, the difficulty of finding suitable washroom facilities in a timely manner. When I'm driving in Washington & Oregon, we always stop by the rest stops; use the washrooms, stretch our legs, maybe get a cup of terrible (but free) coffee. They tend to be well designed & well run, reasonable clean and well used. Let's just say, that didn't seem to be the case on my travels today. I think I pulled in two or three rest stops today and just kept on driving (and those are the ones I stopped at!). Fortunately, just as I was starting to get desperate, a sign loomed like a holy grail in the distance... I experienced my first 'Little America'. Little America rest stops are more than just a place to pee- but if that's your purpose, then you're in for a treat- sparkling clean MARBLE bathrooms, with marble shower stalls too! And a HUGE gift shop that you could waste a whole afternoon in, and a restaurant, C-store, a gas-station, post-office, truck stop, and HOTEL! Seriously, go to the website. It's freaking unreal. 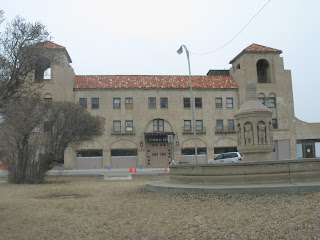 Around lunch time I pulled off the highway because I saw a sign for a little Mexican joint, and it sounded like the perfect place to stop. Unfortunately, it was really busy, and the temperature had dropped, so I had to give up on lunch as I didn't want the boys to freeze in the car while I was eating tamales. It was a neat little side trip though, as the entire town is done up in Mexican architecture, complete with apricot stucco and terra cotta tile roofs. Pictured above is an old Inn. 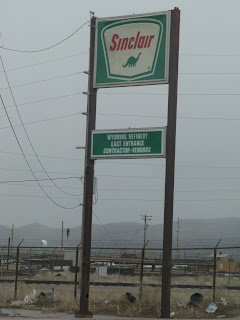 The town is called Sinclair, after the refinery that (I'm assuming) everyone works at. It used to be called Parco... you guessed it- after the original refinery. 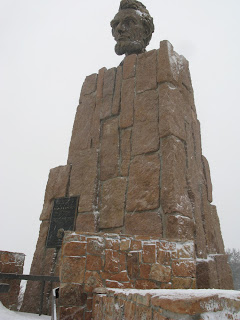 Late in the afternoon it started to snow, and I decided it would be prudent to make another rest stop just in case we ran into trouble. I did run into trouble- at the rest stop, in the form of LOSING MY CAR KEYS! I was on the verge of being hysterical (though some witnesses might argue I was over the verge) when I finally found them on a ledge in the Ladies'... right where I left them. From now on, when I'm not driving they'll be safely secured to a carabiner hooked on my belt loop. Once the keys were safely in my hands, I decided to freeze my ass off and nearly break my neck taking a couple pictures of this Lincoln Monument. 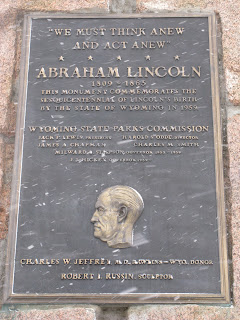 Now, we're safe and warm in a budget chain motel in Cheyenne, WY. To be perfectly honest, I've been very spoiled staying in fancy hotels, so 'slumming it' was never going to be very fun for me (I'm such a snob). However, whatever my expectations were, the rooms I've had so far have been so much worse. Truly Shitacular. 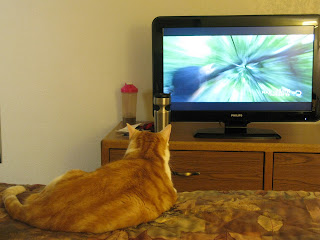 So, it really feels like tonight we hit the jackpot. We're at the same chain we've been using all along (except for that hellish night in Baker City), but the room is soooo much nicer, and the bed seems pretty comfortable. Max is especially happy with the flat screen TV. 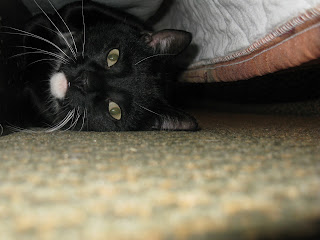 Leo is sad that he can't hide under the bed (the frame is enclosed), but he's made himself really comfortable under the bed skirt.
Today's drive: 703 kms in 7 hrs.
Starting point; Ogden, UT.
Terminus; Cheyenne, WY.
Playlist:
Audiobooks:B is for Burglar (Kinsey Millhone Alphabet Mysteries, No. 2)

This post was a real labour of love, let me tell you. It took me a full 3 hours because blogger (or my crapulent motel wifi) kept screwing up, omiting large sections, or formatting the pictures wrong. Hope you like it!

A great blog...those truckstops are in Arizona and California also. Everything you could possibly want, even a hot shower for the truckers. They are a license to print money for sure. SO glad your keys found you! Cats look warm and happy!

Hurray for perseverance! You are a very brave woman and will have some wonderful and horrible stories to tell for many years to come;) Love the pictures of the Boys.

Holly! I can feel how tired you are getting.

When I saw the Abe Lincoln statue I wanted to laugh. Don't ask me why. i just think it's funny! I scrolled back to it a few times and I just want to laugh!

Love the blog, Holly! You should turn this into a book.

I tested out the Abe statue effect again.

I started to laugh as soon as I saw it. What's with that?