Our first day on the road started out very well. I picked up the cats from the cat hotel, gave them their sedatives, and away we went! 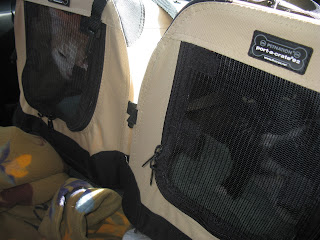 In no time we were at the border crossing, and after a short wait, it was our turn at the booth. I expected to have to pull over and go through customs inside, complete with cargo & pet inspection. I had my passport, the cats' immunization records & international bills of health, paperwork to import the car, supplemental paperwork from the initial visa application, and a manifest of everything in the car. This, I'd been led to believe by a number of sources, was what I'd need to present. I also expected to possibly pay duty on the car.
I pulled up to the booth and handed the guard my passport. He looked at it and asked;
"Where's home?"
"Currently? Baltimore." I replied.
"Where are you coming from?" he inquired.
"Delta." I responded (I've been staying at my parents' place being nursed back to health and eating their food for the past 3 days)
"What do you have with you?"
"Two cats and my personal effects"
"How much currency coming with you?"
"$300 cash"
"Okay, have a nice day."
Whaaaaaaat? Well, he didn't have to tell me twice! I sped away before he could change his mind, grabbed gas and was on the road again by 10am.
Unfortunately, this is where my luck ran out today.
By 10:15am, Leo had figured out how to open the zipper of his travel carrier. I pulled over, put him back in the carrier, and secured the zipper. Off we go again! 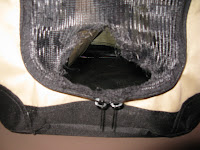 By 10:30am, Leo had chewed a hole in his carrier big enough to escape through & he was loose!
For the first hour, I let him roam the car and get acclimatized to his surroundings. He climbed all over me, the car, and the luggage, trying to find the best view. This became problematic as he decided the best view was from the dash. 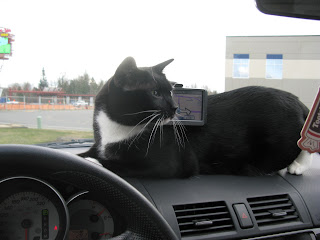 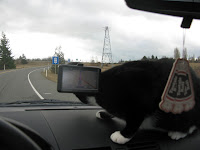 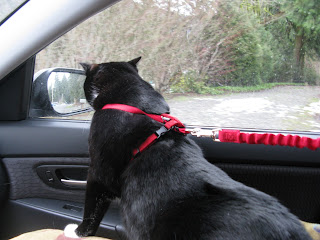 Step two was to harness up. This worked for awhile, until he discovered that the leash stretched enough to let him play at horizontal bungee jumping.
This might be a good time to mention that while the sedative I gave the cats (actually, I ended up giving them a dose and a half after 30 minutes of no results) worked a little on Max, it had no effect on Leo. Actually, that would be a lie. While it didn't calm him down, it made him very stoned. Who knows, maybe to him his carrier was made of marshmallows and he couldn't resist chowing his way through. Leo does love marshmallows.
Nearing Seattle, traffic was getting more congested, and Leo was getting more agitated. I pulled into a Walmart and pulled out a credit card. 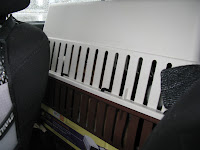 30 minutes later I'd successfully assembled a crate big enough to hold a poodle (or a 5yr old, in a pinch). The crate went into the car, the cats went into the crate, and I went in to the washroom.
Apart from the occasional mewl or hiss, the rest of the trip went very smoothly. And to tell you the truth, if it hadn't, at that point I would have just turned up my audiobook.
Today's drive: 290kms in 6 hrs.
Starting point; Delta, BC, Canada.
Terminus; Olympia, WA, USA.

Hope the new cat carrier proves to be inpenetratable! M&D

Wow! Leo is a genius.

Loved that you were over-prepared and you had a nice customs officer.

Have fun today and thanks for the laugh!

I am glad customs was better than expected. I never even considered that they could eat their way out of their carriers...unzipper maybe. It's good information though because I had considered the cloth version - now I will stick to plastic. I love the way you write - Jeff and I were both laughing about your adventure.

Glad you guys are enjoying my antics! Nice hearing from you all!!!