A few weeks ago, my good friend Eunice was sweet enough to come on one last day trip to Seattle with me, even though it was Superbowl Sunday! We hit all my favourite spots, ate way too much good food and had a really nice time. It was the best Seattle send-off I could've had.

I've definitely caught Mike's flu, so I want to go to bed, but I've been meaning to write this post for so long! I think I'll just post some pics and a few lines, and come back to fill it in later. Enjoy!

Our first stop was the Fremont Troll. 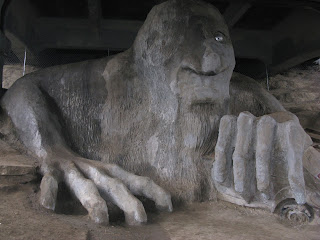 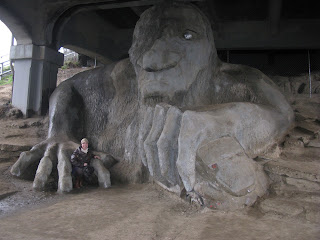 We also walked around Seattle Center and gawked at the Space Needle, Experience Music Project, Pacific Science Center, other buildings and public art. 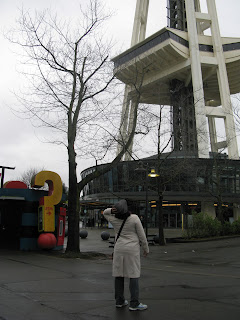 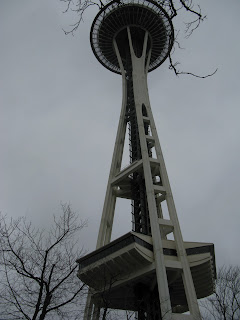 Then of course is the infamous 'Gum Wall' in Post Alley under the Pike Place Market. 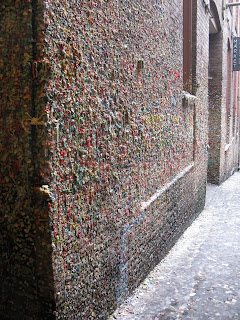 We stood outside and smelled the delicious coffee at the very first Starbucks... but the line was too long to go in, 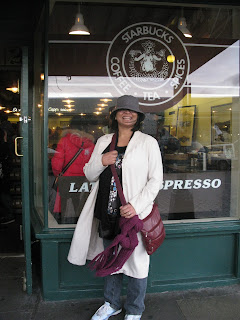 After an unbelievable dinner at Poppy (see menu below), we stopped behind a giant church in Capital Hill overlooking downtown Seattle, and Eunice snapped this pic. 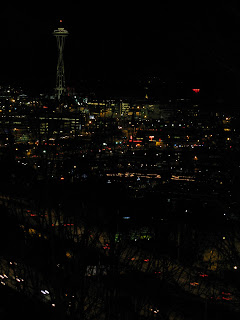 Oh oh, I saw the Troll when I was in Seattle a couple years ago. I was looking for him because I'd been reading about Fremont, in a kid's book actually, and also heard the book's author speak about the area. Found it completely by chance too, my friend and I were driving around, slightly lost and we went by it. I slammed on the brakes and went "That's the Troll!!!". Luckily nobody was behind me and my friend didn't even laugh at me. Well, not out loud. Glad you had a good visit to Seattle:) I would love to explore it more someday.

You totally should- so many interesting nooks and crannies that you find just by accident. I recommend bumming around the capitol hill neighbourhood. Lots of cool little places to eat & shop, crazy public art. Weird but awesome thing about Seattle- the homeless are much less scary and aggressive than their Vancouver counterparts. Maybe I'm generalizing, but there seems to be less of a (visible?) drug problem. Makes the city much more walkable. That probably sounds callous, but there it is.