Touring with Tara OR Beautiful Baltimore

What a month! May has had it's ups and downs, but since the ups were so awesome, that's where I'm going to start. We had our first house guest! My good friend, the gorgeous and super-fantastic Tara came for a visit! I can't tell you how nice it was to be able to hang out with a friend. Despite having been here almost 3 months now, I haven't really been out much. With Tara here, I had no excuse not to go out and see my city! 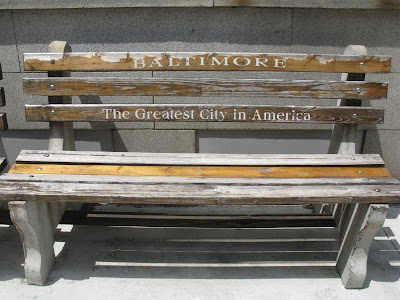 Before my adventures with Tara, I'll admit I didn't hold Baltimore in very high esteem. I'd heard that there were nice bits, but I assumed it was like this crappy old bench- once shiny, now worn, patched and beat-up . Well, there are definitely parts like that, but together, Tara and I found the charm in Charm City. 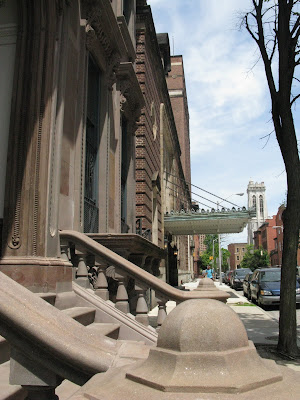 We started out in the Mount Vernon neighbourhood. Right off, the architecture blew us away. Above is an example of any old street in this area. What got me was the attention to detail, and the creativity that went in to making these buildings. Not only were they built to to last, they were also built to captivate. 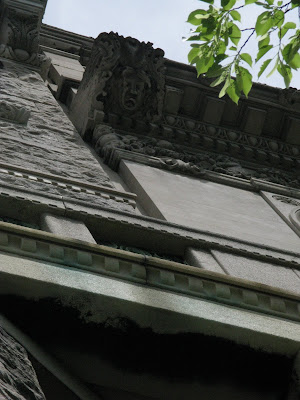 Each building, if you took the time to look, had something special to offer. Some had elaborate leaded glass work, others had decorated pillars or the original (painstakingly restored) carved wood doors. This fellow caught my eye when I was looking for the source of a birds' call. 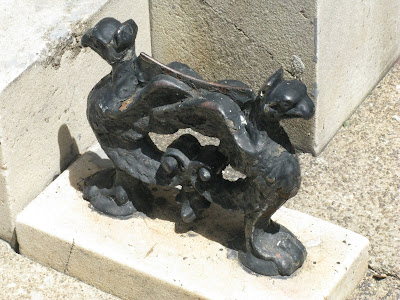 Another cool feature we noticed on our stroll were these boot scrapers- some plain, some shaped like griffins and other beasts. They were all over the place, and I can only assume that they are the original ones from before the roads were paved. Who knows how old they might be, as the city of Baltimore was founded in 1729. 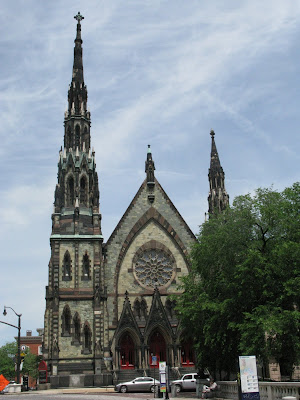 Based on what I've seen so far, Baltimore is a city of churches and monuments. They're everywhere. Some are modest, others magnificent. I won't bore you with every picture we took that day, but here are a few of my favourites. 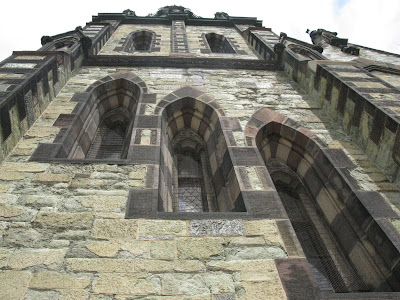 Above and below is the Mount Vernon Place United Methodist Church, built in 1843. It sits at the very edge of a large and extremely confusing traffic circle. Seriously, it has multiple traffic lights- some to let you into the circle, others to stop you while you're in it. I pledge here and now never to brave it by car, as I fear for my sanity (and for others' safety). 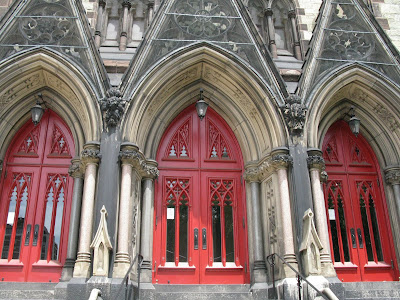 I amused myself imagining that these are the doors that let the sinners in. I tried the door, but it was locked (what does that say about me, I wonder). Actually, as far as we could tell, none of the churches were open to the public. Such a shame as the interiors must be breathtaking. 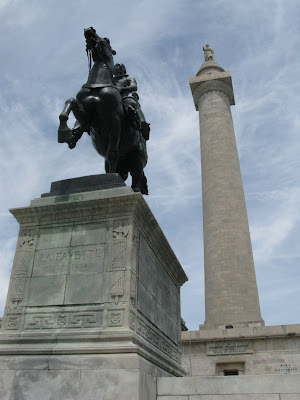 Here is Baltimore's Washington Monument. Smaller than the one in DC, but us Baltimoreans will have you know ours was the first. I'll also venture to say ours is better looking. So there, DC. To the left of the monument is a statue of La Fayette, whose army of Frenchmen came to the aid of the Americans during the American Revolution. 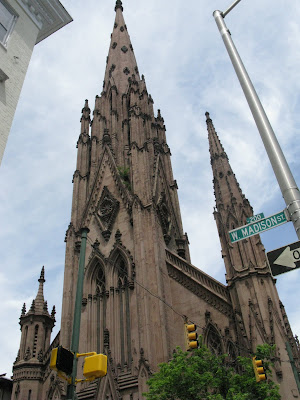 My favourite building of the day was the First and Franklin Street Presbyterian Church (on the corner of Park Ave & Madison St... weird, eh?) built in 1847. The style is tudor-gothic, and pictures don't do it justice. If you look closely just above and to the right of the rosary window, you'll see a tree that has taken root. Below are a couple more shots from different angles closer up. 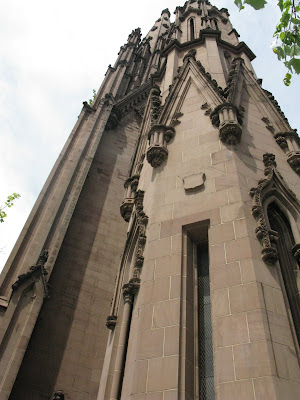 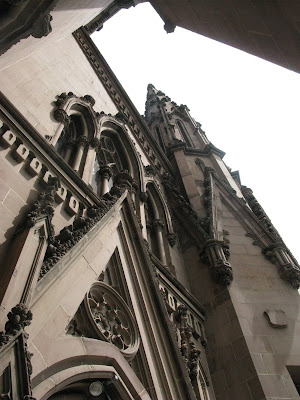 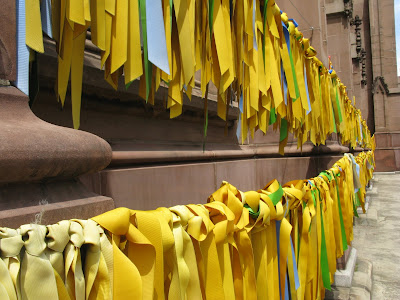 Around the side of the church is an impressive display of prayer ribbons. Buddhists have something similar called prayer flags. They write a prayer, or draw a mandala on a piece of bright cloth and hang it up. The idea is that every time the wind catches the flag, the prayer is blown away to heaven.

Our first thought was that there should be more blue ribbons. 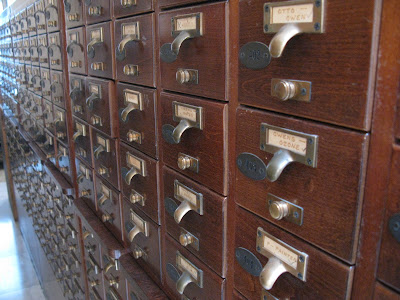 Now library lovers, prepare yourselves for one of the most amazing sights in Baltimore; The Peabody Institute Library. 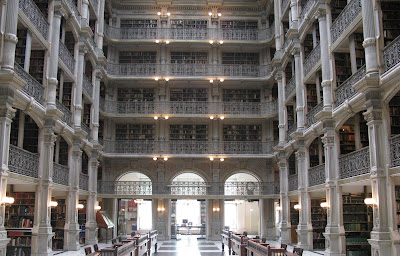 George Peabody donated $300,000 to get things started, and the Peabody Institute opened to the public in 1878. When we were there, there were several groups of people studying, but despite this the hush was enormous. 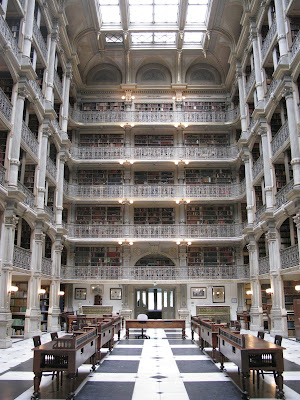 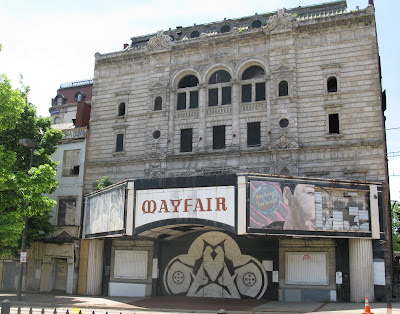 To end my post, I'll leave you with a picture of the Mayfair; a derelict theatre next to the economy lot where we parked. For your reading pleasure, (and to satisfy our curiosity) we chatted up the lot attendant for some background information. Built in 1880, it was in nearly continuous use for 100 years. During it's life it was a gymnasium, skating rink, auditorium, theatre, and cinema. For the past 30 years it's stood empty, and over time the windows were broken and the roof caved in. The Mayfair is the last old theatre on a street that was once all theatres. Proof that, for better or worse, we can't hold on to all the treasures of our past.
Posted by Quill at 4:35 p.m.

Ohhh what a beautiful card catalogue! :) I miss them. Gorgeous buildings too. I'm glad you got out and explored some more of the city. Parts of it sound scary but there is always beauty hiding around the corner!

That pic of the card catalogue is one of many I took that day! I think Tara & the other people there thought I was nuts. Glad to know I'm not alone!

Sounds like when all I took pictures of was family gravestones when I was in Nova Scotia with my Mom. She couldn't understand my fascination with them either! LOL There is just something about a card catalogue tho...and glad to see you are still spelling Canadian too;)

I wonder if you can purchase old card catalogue(s). They would be great re-purposed in a home.
Interesting to explore the depth of your new city. Good for you!

I've seen a few card catalogues used in decorating projects but no idea where you would find them now - probably at auctions, maybe Ebay...now where would I fit it? Hmmmm.

The Peabody Library reminds me of the scene in "Beauty and the Beast" where the Beast opens up the doors to his library for Belle...wow that's A LOT of books! Holly I hope you didn't stop to read everything (LOL)